British television detective mysteries are known for ensemble casts. The characters are eclectic and diverse representing a large swath of people. It’s quite refreshing to see actors playing “normal” people. Gone are the overly sexy, highly polished and poised characters coming out of Hollywood. When was the last time you saw a female police detective in a pencil skirt and 3-inch heels? Like never. Season one of Broadchurch went a step further by incorporating a psychic into the storyline. It was a positive, nearly honest, representation of a psychic in prime time. 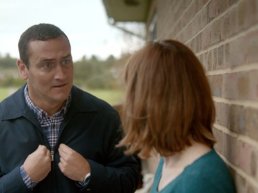 Debuting in 2013, Broadchurch is now in its 3rd and final season in the UK. The first season 8-episode run had 7-9 million weekly viewers, which is fantastic. (Fox attempted a US version, Gracepoint, which was cancelled after one season) According to IMDB.com, season/series 1 dealt with “[t]he murder of a young boy in a small coastal town bring[ing] a media frenzy, which threatens to tear the community apart.” As with most detective mysteries, nearly everyone in town was a suspect. And one stood awkwardly out: Steve Connelly, portrayed by actor Will Mellor.

“Steve” would have blended into the background and off of the radar of DI Alec Hardy (played by David Tennant—yes, as in “The Doctor”) and Detective Ellie Miller (played by Olivia Colman), except he felt compelled to share his visions with them. His psychic messages add to the colorful dialog (see below). Barring spoilers, you should give this show a chance and see for yourself. It is streaming on Netflix. Psychics have assisted police departments and families seeking answers, closures, and even suspects. It’s time they appear more as characters supporting the investigations.