Chapter 4 in the popular Insidious franchise opened a month earlier than expected this past weekend. Still, there was plenty of time for movie critics to review and to thoroughly trash the film. Filmed on a meager $10 million-dollar budget (considering the entire franchise has brought in over $378 million), the film takes parapsychologist Dr. Elise Rainier back to her former home to investigate strange phenomena. The film is expected to pull in $26 million in the US and land in 2nd place behind Jumanji: Welcome to the Jungle. From the reviews I’ve read, I’ll wait for the film to stream.

The first Insidious (2010) made $97 million worldwide. This was a huge margin of profit considering the estimated budget was a paltry $1.5 million. The initial film was the strongest and best; however, Chapters 2 and 3 grossed more. The production company rubber-stamped a Chapter 4 and seems fine with the lackluster film. [Note: The films should be viewed in their story order which is 3, 4, 1, and 2.]

The Guardian gave Chapter 4 2 stars. Jordan Hoffman likens Elise’s sidekicks Specs (played by screenwriter Leigh Whannell) and Tucker (played by Angus Sampson) to the Scooby-Doo gang with their Mystery Machine van. Hoffman bluntly states that the film “squanders its opportunities to get interesting.”

Although NPR’s Scott Tobias enjoyed the interplay between Lin Shaye’s Elise with Specs and Tucker, he tired when the film enters the predictable “The Further.”

RogerEbert.Com’s Simon Abrams warns viewers to bring a friend. He writes that the films really are improving but some viewers may miss the subtlety. He writes: “This one is almost good.” 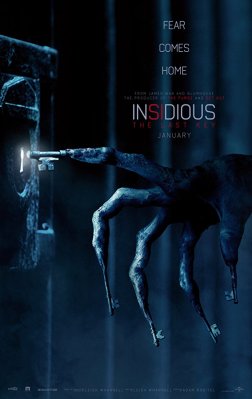 Insidious: The Last Key’s release date was moved up in anticipation for February’s highly anticipated Winchester starring Helen Mirren as the haunted heiress to the Winchester gun fortune and the Irish film The Lodgers which has garnered solid reviews. If you’re a monthly moviegoer, see all three; however, if you must select one, choose The Lodgers.