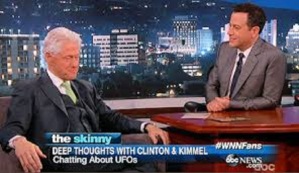 “Kooks” Are Nearing the Majority

Former President Bill Clinton made Internet news when he appeared on Jimmy Kimmel’s TV show and discussed aliens. Specifically Roswell, New Mexico. Although Mr. Clinton discounted claims that aliens were housed at Area 51, he was very receptive to the idea that extraterrestrial life exists. How could it not?

Unidentified Flying Objects, or UFOs, sightings have occurred throughout history. In the Book Ezekiel from the Bible mentions a sighting.

1912: First comment made by a political figure, Winston Churchill;

1963: Barney and Betty Hill claim to have been abducted by aliens;

1975: Travis Walton abducted by aliens in Arizona and witnessed by his friends.

The common thread is that all of these people claim that little, green men with big eyes abducted them. M. Night Shyamalan’s Signs portrayed them as greenish-grey creatures with large eyes.

The U.S. Air Force coined the term “UFO” in 1952. This term applies to anything in the sky that is unknown—at the time. Admittedly, most people did not have access to information like today. So, most of what was seen back then was unknown. However, there are over 70,000 sightings worldwide each year! Still.

48% of Americans are receptive to the idea that extraterrestrial life exists;

35% of Americans do not believe at all;

16% of Americans are just not sure;

Democrats believe more than Independents (2nd) and Republicans (3rd). That applies to UFOs and paranormal;

37% of the believers are college graduates;

53% of the believers attended college;

79% of Americans believe the US government is withholding information;

1 in 5 Americans believe in alien abduction;

1 in 7 Americans know someone or personally experienced an encounter of some form;

1 in 10 Americans have personally witnessed a UFO;

3 in 4 Americans believe that aliens have left “signs” of their existence;

1 in 5 Americans believe that Washington, D.C. will be the “landing zone” for an alien encounter. That’s good news for Bill, unless Hilary runs.

Extraterrestrial researchers agree that intelligent life exists in the universe. They’re unsure, however, if it exists in our galaxy. I agree!