With travel on hold due to the COVID-19 pandemic, I’ve become an armchair traveler. I browse the Internet looking for strange destinations to place on my bucket list. I came across the Mexican folktale of La Pascualita, the bride who stands in the showcase, in downtown Chihuahua, Mexico. Her story is too good to be true.

Although some blogs suggest that La Pascualita is an embalmed corpse, she’s not. There are several explanations for why she looks so lifelike, and none of them are due to embalming fluids. She is, nonetheless, a stunning waxwork.

Local legend claims that she appeared in the bridal store’s window on March 25, 1930. She wore a gorgeous spring wedding dress, just in time to celebrate Easter weddings. (Easter fell on April 20 in 1930) It should be noted that the name “Pascuales” means “Easter” in English. “Esparza” translates into “sprinkle” or “scatter.”

According to the legend, the shop owner, Pascuala Esparza, had a daughter who was to be married. Neither the name of the daughter nor the bridegroom are reported. (Hmm.) On her wedding day, the bride-to-be was bitten by a Black Widow spider and died. Shortly thereafter the mannequin appeared in the window.

Local residents compared the mannequin to the shop owner’s deceased daughter. They do favor each other; however, this proof that the mannequin is the actual corpse bride.

Since then, people claim the mannequin changes positions during the night. People also report that her eyes follow them down the street. An even more fantastical story is that a magician from France visits, placing a spell on her or awakening her from her slumber so they may dance the night away.

There are huge plot holes in the story.

First, there are questions whether there was a shop owner named Pascuala Esparza. I can tell you that FindAGrave.com does not show any burials for a person with that name or any variations.

Certain staff members change the clothing twice a week. This is done behind heavy curtains. One employee says she dislikes touching the waxwork. This explains why some people think the mannequin moves. She does. Only she moves with the assistance of employees.

Waxworks are known to have roving eyes. This is on purpose. The eyes of wax figures are glossy. They are meant to appear real, and our minds convince us that the eyes are following us.

Also worth noting is the date March 25. In the Roman Catholic Church, March 25 is the Feast of the Annunciation, where the archangel Gabriel tells the Virgin Mary that she will deliver a child who shall be the son of God. The religious day is oftern called “Lady Day.”

I’m wondering if someone was trying to infuse a lot of symbolism into the mannequin. Hopefully, one day I will be able to visit and to see for myself.

Thirty-seven miles from Dubai sits a small experimental town that has been reclaimed by the elements. Known as “Ghost Village,” “Old Village,” or “Buried Village,” this abandoned hamlet holds many mysteries.

Built during the 1970-80s, the town was conceived as permanent housing for nomadic tribes. The UAE (United Arab Emirates founded on December 2, 1971) sought to built towns for the Bedouin or Bedu tribes. One such town was built outside of Al Madam.

The “Ghost Village” consists of two rows of houses and one mosque. The colorful interiors contrast with the inhospitable sandstorms that push sand dunes into the buildings. The town gave way to nature.

UAE government agencies have attempted to identify who lived in this town. Unfortunately, there aren’t many people left to explain how and when the people fled. It is believed that the Al Kutbi tribe resided here. But no one knows for sure.

Dark tourism tours have popularized the town. Talk of an evil djinn named Umm Duwais inhabiting the town and scaring tourists out are making the Internet rounds. According to Arabian legends, djinns can be good, neutral, or evil. Maybe this djinn is good and is merely telling tourists to be cautious when entering the desert. 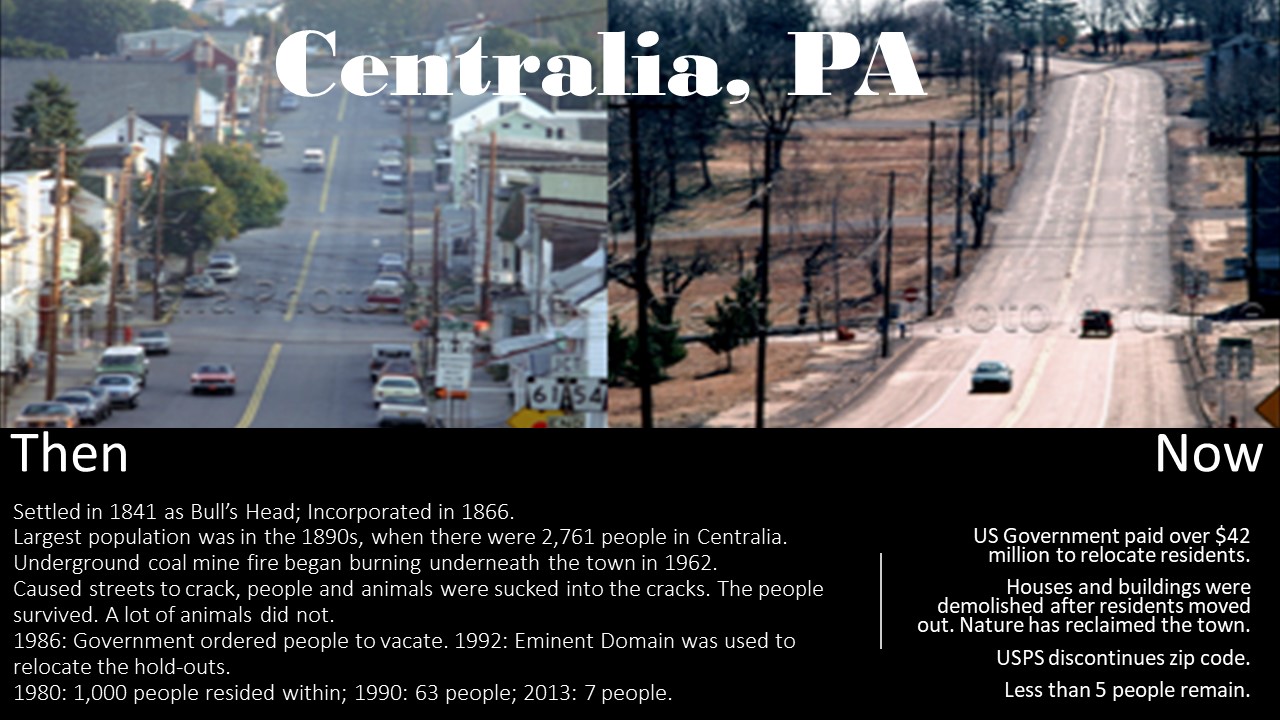 Centralia is a modern-day ghost town created by man.

Centralia, PA was an ordinary town with a steady population of a thousand or so residents. Centrally located within the state, Centralia was a coal mining town. In 1962, local volunteer firefighters sought to clean up the town’s landfill and set it on fire. The fire was never extinguished and went subterranean. In 1972, then-mayor Jim Coddington, owner of the local gas station, recorded elevated temperatures in his gasoline tanks. It wasn’t until 1981, when 12-year-old Todd Domboski fell into a sinkhole, that the government took notice. By then roads were cracking with hot steam floating up. 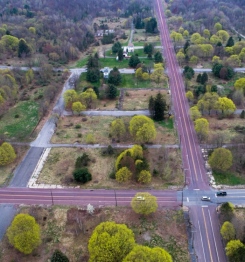 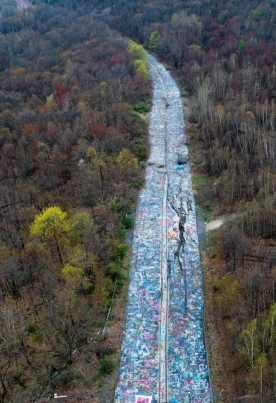 Congress allocated $42 million to relocate the town. All but a handful of residents left. In 1992, the US government proclaimed eminent domain and reclaimed the land. After demolishing the houses and buildings, the government let nature take over. Today, only 5 residents remain. However, the town is a popular “Dark Travel” destination. Please remain vigilant and respect the land if visiting. 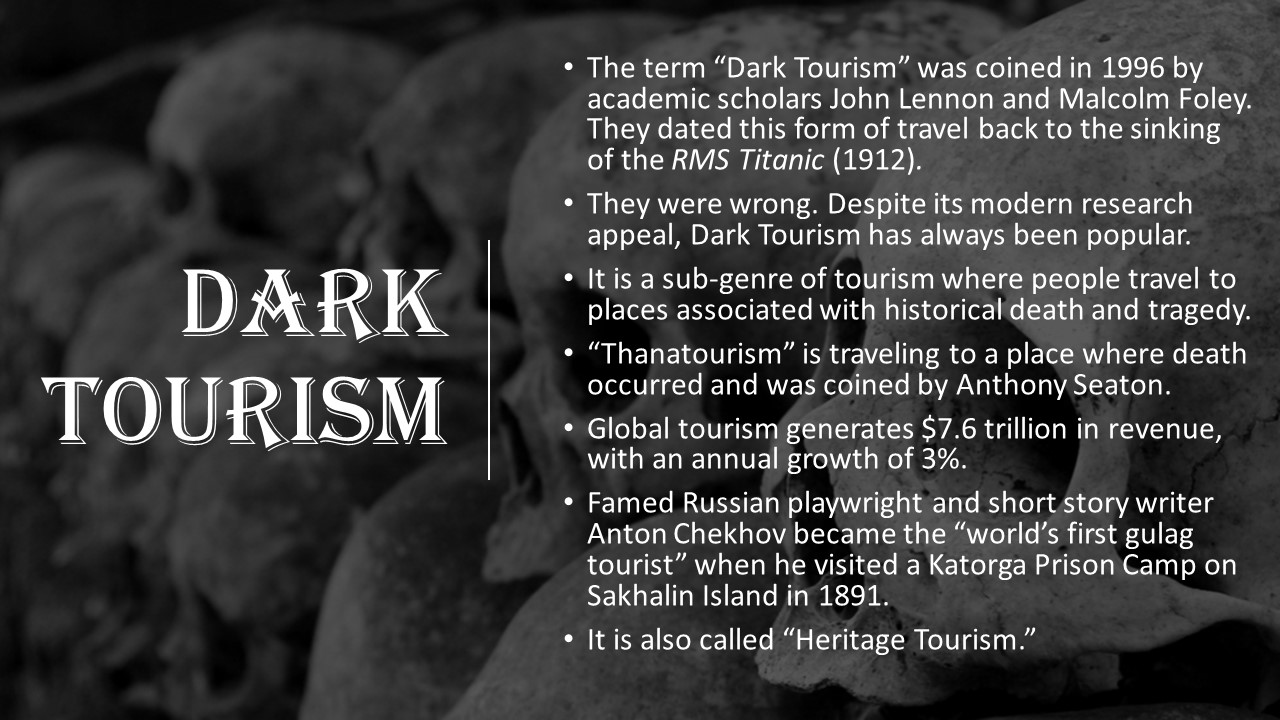 ≈ Comments Off on What Is “Dark Tourism”?