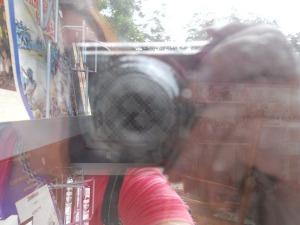 Located in Henry County, Georgia, this farm covers 204 acres. It was the final stop in Sherman’s Atlanta Campaign and was the largest Cavalry raid in Georgia.

Between August 18-20, 1864, General Sherman ordered Major General Judson Kilpatrick’s cavalry to break through the Confederate infantry. This raid would be considered the largest cavalry charge in Georgia.

Today, the Nash Farm Battlefield is a backdrop to the Civil War. The rolling fields are open and meticulously preserved. Dirt trails allow for vehicles to drive around the property. Detailed signs highlight the events leading up to and after the raid. The large pond and cement dock remind visitors of how vast the farm was. It is a place where time has stopped.

In the coming days, I will report on our investigations at the farm.

A museum sits on the property; however, it is open only on Fridays and Saturdays. Another homestead is also on the property. It has not been restored and is shuttered. Visit www.henrycountybattlefield.com for more information. Note: The Battlefield is OPEN and not subject to any federal slimdowns.