This past weekend, Archer Paranormal Investigations (API) conducted an investigation at a private residence in McDonough, Georgia. As we were going through the house taking baseline pictures, we headed outside to the backyard. As many of you know, most of the USA was overwhelmed with the Polar Vortex this past week, too. Georgia received a lot of rain. Further, a major thunderstorm raked through the state earlier that day. The ground was saturated and we were trotting along in our rain boots. Jenn was back around the rather large shed and her foot fell into a hole. Not finding much outside, we ventured back in when the homeowner said, “Did I fail to mention the pet cemetery in the back?” Ah, yeah, you did. However, now my interest is piqued. I’m sure everyone has buried a dead pet in the backyard. Or cast it to sea in the case of fish.

Ancient Egyptians mummified and buried cats along with royalty. Archaeologists unearthed 40 dog mummies in a pet cemetery in Ancient Peru. In the ancient world, the largest dog cemetery was the Ashkelon National Park in Israel. In London’s Hyde Park, an informal pet cemetery was active between 1881-1903. The first burial was a dog named “Cherry.” This cemetery hosted 300 burials. The longest continually running pet cemetery is located in Hartsdale, New York. In 1896, a grieving dog owner could not find a proper place to bury her pet. She expressed her sadness to a veterinarian, Dr. Samuel Johnson, who offered to bury the dog on his apple orchard. Thus created the Hartsdale Pet Cemetery and Crematory. Dr. Johnson was a co-founder of the ASPCA, by the way.

By September of 1905, the cemetery grounds had grown to 3 acres. Over 1,000 pets had been interred by 1914. A War Dog Memorial was erected in 1923 to honor the thousands of dogs that died in action during World War I. Most recently, Sirius the dog that died during the 9/11 terrorist attacks was interred here.

Commonly known as “The Peaceable Kingdom.” The cemetery has over 80,000 pets including dogs, cats, monkeys, horses, and a lion cub that once resided at the Plaza Hotel. Further, it is the only pet cemetery on the National Registry of Historical Places. Quite an honor! 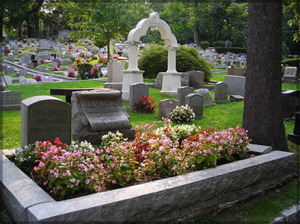 View of the Hartsdale Pet Cemetery and Crematory, also known as “The Peaceable Kingdom.”

War Dog Memorial erected in 1923 honoring the dogs that died during WWI.