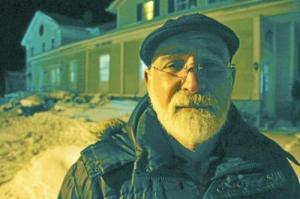 Last year at Scarefest, John Zaffis told me that he might purchase a former funeral home and relocate his museum of all things haunted. Seems Zaffis may have identified the perfect location: the former McBride Funeral Home. Zaffis claims the building has the proper “creepy edge” required to draw in visitors.

According to an article in The Berkshire Eagle Newspaper (Adams, Massachusetts), Zaffis toured the vacant building with an architect and the town building inspector. But don’t plan a visit anytime soon. If Zaffis does make an offer, it will be several months before the museum would be operational.

Offered at $79,000, the funeral home consists of two separate buildings connected by a common entryway. Both buildings feature a large meeting room on the first floor. An apartment is on the second floor of one building. Zoning has already been changed from residential to commercial. Zaffis doesn’t anticipate a large-scale renovation. In fact, he states that the buildings are almost ideal for what he has envisioned.

Zaffis’ plans include utilizing one meeting room for paranormal lectures. The other large meeting room would house 20 of his largest items with a rotating exhibit of smaller pieces. He would stay in the apartment while in town. The additional upstairs space would be used for storage.

Zaffis started the Paranormal and Demonology Research Society of New England in 1998. He starred in the paranormal hit TV show The Haunted Collector. In addition, Zaffis appears at paranormal conferences throughout the year.

Zaffis spotted the abandoned funeral home and felt it was creepy enough to house a paranormal collection. If realized, the museum would be open on Fridays and Saturdays by appointment only. Zaffis’ collection is extensive and large. A collection fit for a funeral home!